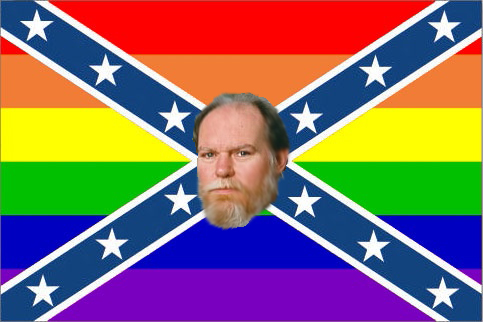 The annual NPI conference at the national press club on October 31 is the wonky big to do for the suit and tie “we only like white boys” crowd. Trustfund baby, Richard Spencer, leaves his parent’s fancy mountain chalet in Montana to fly to DC and try to clean up and educated the next wannabe Jared Taylors and Samuel Francises. Most of the attendees are social rejects who are too nerdy to play with skinheads and too much of an outcast to have any real friends. Hence, they all shell out money to line Spencer’s already full pockets to give themselves a few days of hanging around with people who are just as screwed up as they are, to hear all the racist ideals they usually fester on their own in their lonely lives.

On July 7th Spencer made an unusual announcement out of the blue, that League of the South head, Michael Hill, was on the speaker list: 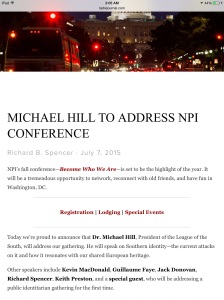 Now, it’s not like Hill wouldn’t fit in with this crowd. He’s another social reject with a massive blown ego who is completely full of himself, not to mention he’s racist as hell which is really the main theme for the event. He preaches a tinfoil hat conspiracy theory that he and his little band of southern nationalists are going to secede from the U.S. and create their own make believe white homeland for southerners only …who are also “Scottish”…for some reason. For Hill, being able to speak in front of a group that is somewhat cleaned up and groomed compared to the bib overalls wearing, grizzly Adams yes-men in his usual small circle, would be in many ways a step up and decent exposure for his dwindling cause.

Just recently it was noted that Hill is off the speaker list. No announcement or explanation given.

One front running theory is the reason might be based on the fact that one of the other speakers is the very out homosexual white nationalist “Jack Donovan”.

Donovan is somewhat of a macho muscleman who hates girls and prefers to be around other macho acting white men. He has written a handful of books on how to start your own he-man woman haters club and how much fun grunting and showing off your muscles with other grunting musclemen can be. And then of course …Thor. Donovan is very good friends with Spencer, has a good handful of admirers in this white nationalist suit and tie set, and for the most part his homosexuality is either overlooked or maybe even embraced by interested persons in the crowd.

But the southern nationalist/KKK set is not quite as open minded:

Now it could be that Hill caved into peer pressure from someone like Tom A Robb who is the cranky old head of the Knights of the KKK, (just say no to thugs, Mikey!)

It could be that maybe sharing a podium with a big hunky muscleman would make Hill look less significant?

Or maybe being in the presence of a guy this built and tasty will give Hill a stiffy and then there is no going back once he catches the gay!!